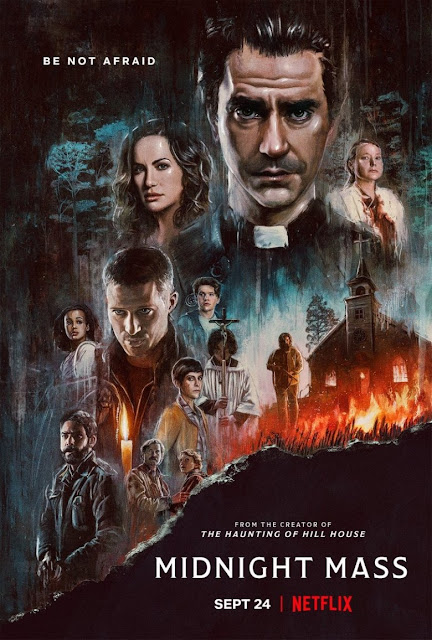 From the creator of The Haunting of Hill House comes a new limited series by Mike Flanagan aptly titled Midnight Mass. Riley Flynn commits one of the most atrocious crimes when he gets drunk and smashes his car onto another, killing the driver and pleading guilty to the crime he is sent to prison for four years. When his sentence is over he returns home to his family in Crockett Island, a small island town off the mainland. Meanwhile a new priest arrives in town; Father Paul Hill who's substituting for their local priest Msgr. John Pruitt who was on a trip to the Promised Land - Israel and likely suffered from health problems. And so the story begins, with the sinner and the savior arriving at the same time. This is a slow burn of a show, wordy in parts particularly with the characters Riley and Father Paul but these two aren't the only characters of note that inhabit the island. There's Riley's parents; Annie and Ed Flynn and his younger brother Warren, Erin Greene the school teacher and Riley's high school sweetheart, Joe the town drunk, Leeza the paralyzed young teenager due to a hunting incident caused by Joe, Bev Keane who helps out during mass service and is a particular type of Christian and then there's the sheriff; Hassan and his son Ali. All the characters feel like they came out of a Stephen King novel and that's a good thing. It's a tight knit community where everyone knows everyone and while that's true in this island town, it's also like a ghost and that's where our story starts.

This is a new segment of the blog I'd like to call 'Report of the Week' where I give you the latest updates to my movie viewing week as well as the latest news on trailers, and upcoming movies and other movie related things which I am going to be posting every Saturday of the week. The title is inspired by the YouTube channel of the same name and it's a channel I highly recommend.
Read more »
By M.E.V. at 12:00 AM No comments:

I guess the best way to start talking about this movie is how I came across it in the first place. Well aside from blogging here I'm also a Letterboxd user and recently came across a scathing review of Lisa Joy's Reminiscence starring Hugh Jackman comparing it to the movie Strange Days by Kathryn Bigelow. The review while critical got me curious about Strange Days and its premise and so I decided to check it out for myself to see what the hype is all about. It tells the story of Lenny Nero a former cop turned street hustler who accidentally uncovers a conspiracy on the last day of 1999 Los Angeles. The movie begins with Nero played by Ralph Fiennes experiencing the last few minutes of a thief before he dies from a fall. Later he tells Tick his supplier that he doesn't deal with snuff then goes on about his day which consists mainly of peddling people's memories and experiences via CD's. We see through Nero's eyes the unrest of 1999 Los Angeles through the looting, and the racism that escalates when the well-loved rapper named Jeriko One is murdered. Meanwhile, the hooker Iris is looking for Nero who leaves a recorded CD in his car. Nero's attempts to get to Faith his former girlfriend are unsuccessful. Soon, when a CD surfaces and Nero learns that Iris was violently raped and killed he investigates and finds out that there's a greater conspiracy unfolding.

Here's another musical for you, this time instead of the backdrop of the Austrian sights it's set in a poor neighborhood in New York City that tells the story of two teenagers with different ethnic backgrounds who fall in love but since they are both from rival gangs this becomes a problem for their friends. West Side Story, like The Sound of Music is another iconic musical that found its way to being made into a movie. I guess the main reason why I'm doing this is because of the new version by Steven Spielberg coming out in December and I'm preparing myself for it just as a refresher to the story. Basically, this is the story of William Shakespeare's Romeo and Juliet but instead of rival families, it's rival gangs in New York City's West Side. The movie starts out with a dance battle between the Jets and the Sharks as they each try to take control over the neighborhood. The Sharks are led by Bernardo and the Jets by Riff. Later, Riff tries to deal with Bernardo via a rumble but not before calling on Tony, a former Jet into the fold. Meanwhile, Bernardo's young sister Maria who recently moved into the neighborhood plans to have a good time at the dance the same evening. When Tony and Maria finally meet at the dance, sparks fly but their respective affiliations with the rival gangs prevents them from being together.

Movies From My Childhood: The Sound of Music (1965)

Where do I even start with one of the most iconic musicals in all of cinema? Certainly among the most popular too? The Sound of Music directed by Robert Wise based on the Broadway musical of the same name with music and lyrics by Richard Rogers and Oscar Hammerstein II. The movie version stars Julie Andrews and Christopher Plummer. It's the story of a young Austrian woman who leaves the convent to become the governess to the children of a retired naval officer. I was about ten years old when I first saw The Sound of Music and I can't remember a time when I was awed by a movie as much as I was this one, it also gave me a sense of what kind of person I want in my life. What I enjoyed the most about this movie is how it isn't just another love story, it's about a young woman who is in search of her place in the world and finding love along the way despite the looming possibility of global conflict and it's effects. In this post I will go in depth with not just with Maria's story but also Captain von Trapp's role as an icon of good masculinity, their romance and the overall place of the movie in cinema history.

Movies From My Childhood: Jumanji (1995) 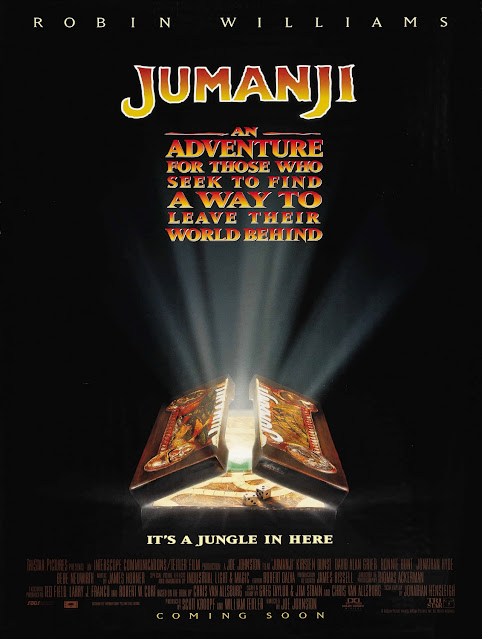 As I got older I've become more nostalgic for the movies from my own childhood and so I decided to start a new series of posts that reviews movies from that time in my life and for my first entry I've chosen Jumanji starring the late Robin Williams, Kirsten Dunst, Bonnie Hunt and Jonathan Hyde. When two kids find and play a magical board game, they release a man trapped in it for decades - and a host of dangers that can only be stopped by finishing the game. I grew up with HBO on our TV set and it was one of the channels I spent most of my time on and I look back on it every now and then. Jumanji is among my favorites growing up and while I've seen it countless times over the years, there's still something special about it. Could it be the CGI of the time or is it because the story has a lot to offer? Having seen it again recently I noticed things that I never did before.

Based on the novel of the same name by Sally Rooney, the story follows Marianne and Connell, from different backgrounds but the same small town in Ireland, as they weave in and out of each other's romantic lives as well as navigate their individual lives as students in Trinity College. I have the novel with me but my first attempt in reading it was unsuccessful so when I heard that a mini-series was being made I was cautious and excited at the same time. The show came out just last year and being reminded of its existence I immediately decided to binge watch it. Normal People stars Daisy Edgar Jones and Paul Mescal as Marianne and Connell with Sarah Greene who plays Connell's mother Lorraine. The production values are amazing, the cinematography, the music are all there to serve the story but the real stars of the show are the two leads who have palpable chemistry that can go from fragile to something more in tact which pretty much describes their relationship throughout the show. Marianne starts out as the loner in what I assume is the high school equivalent of the Irish educational system and Connell is the rugby star and all-around popular boy. As Marianne starts to take interest in Connell and finds out that the feeling is mutual they get together in secret.

Another movie blog posting reviews of new and old movies. Currently there are two segments in the blog each dedicated to a certain type of movie Western Wednesday which will be posted every Wednesday about movies set in the Wild West and Midnight Special which talks extensively about old movies no one talks about anymore.